Teens do not get enough sleep. Most teens need 8.5-10 hours of sleep each night. Not 6 hours. Not even 8 hours. Most don't get even close to meeting their needs and that's a bigger deal than many realize. Sleep is very undervalued, but we need to prioritize it. 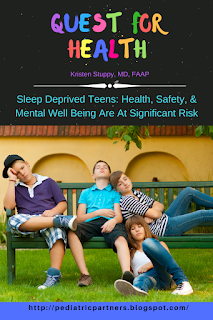 Why don't teens get enough sleep?


One of the most common reasons is that their biological clock (AKA circadian rhythm) makes it hard to fall asleep before 11 pm and school starts too early to allow them to sleep until 8 am, which would allow for 9 hours.

In addition to their circadian rhythm, some of their habits and activities can interfere with a healthy bedtime.

What happens with too little sleep?

Sleep deprivation can lead to many problems that are often not attributed to poor sleep, such as irritability, poor academic performance, accidents, obesity and more.

Pros and Cons of later school start times for our economy


There are many temporary issues with changing school start times. Parents might have to find solutions to child care of younger kids if they rely on teens babysitting after school. New bus schedules need to be started. Sports programs will need to change practice times. After school job availabilities will change.

Despite these common arguments, economic analysis from the Brookings Institution shows that a one hour delay of school start times could lead to a $17,500 earnings gain for students, compared to a cost of $1,950 during the student's school days.

Another study that presumed all students start school at 8:30, with a year-by-year economic effect. The study did not take into account other potential benefits of later school start times, such as decreased depression and obesity rates. They found an average annual gain of about $9.3 billion due to fewer automotive accidents, improved graduation rates, and other factors.

What can teens do to get more zzzz's?

We all need to prioritize sleep: for our kids and for ourselves. Our bodies and minds will thank us.