I thought about titling this one "We're drowning in dry drowning phone calls" because we are getting many worried calls about dry drowning, but that's overly dramatic and I hate headlines that make things seem like the sky is falling... 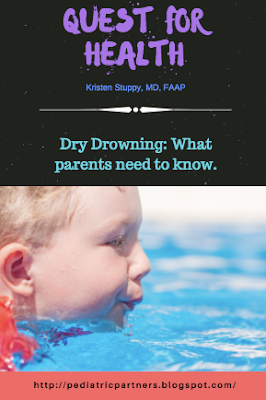 I had never heard of dry drowning until social media picked it up a couple of summers ago. Maybe I did as a resident, but since I've never seen it, I'd forgotten the term. Either way, it isn't very common at all, but it is an emergency when it happens, so it's good that we all know that it can happen. People also use the term secondary drowning and some experts differentiate the two by whether or not water actually gets into the lungs, causing swelling of the lung tissue, or if water irritates the vocal cords, causing them to spasm and close off. Either situation is potentially life threatening and they have similar symptoms. Note: Please see the addendum at the bottom. Several articles have emerged since the original writing of this post that clearly indicate there is no such thing as dry drowning.

One of the reasons I think so many parents are worried is that it is common for kids to go under water: in the tub and in the pool. Many get water in their mouth or complain that it went up their nose. Few actually get any into their lungs, which is where it can cause problems. How can you know when you need to worry?

Most of us recall a time we coughed briefly after inhaling liquid, and we were fine. So when is it worrisome? It's when the water that gets into the lungs causes inflammation within the next day or two. This inflammation makes it hard for the lungs to work - the air tubes are swollen, so air can't get through. Treatment is giving oxygen, sometimes with a ventilator (breathing tube and machine) until the inflammation goes down.

Symptoms you need to recognize and act upon by taking your child to an ER:

What will happen in the ER?

Many parents don't want to go to the ER because of high co-pays. We try to keep kids out of the ER as much as possible. But some issues are better taken care of in an ER. Most offices don't have the equipment or staff to manage these issues well. Dry drowning can be life threatening, and the evaluation and treatment should start in the ER. I cannot say exactly what the doctor will do, since that will depend on your child's symptoms and exam. There is no specific treatment for this, only supporting your child's airway and breathing as the swelling goes down.

As with many things, we should do all we can to be sure our kids are safe around water. This includes the bathtub and toilet as well as swimming pools, lakes, and ponds.

I just read this post that gives references regarding drowning definitions. It appears I didn't forget learning about dry drowning in medical school. It isn't really a thing. The symptoms listed above that I recommend getting evaluated are still concerning symptoms, but they might be from another cause. Check this out: On "Dry Drowning"

Another: Drowning in a Sea of Misinformation: Dry Drowning and Secondary Drowning