Deja vu. I feel like I've been through this before.

Two of my most-read blogs were about generic forms of Concerta available in 2013-14. The FDA had allowed companies to manufacture and sell tablets that were not the same as Concerta. People across the country noticed the change immediately. I started seeing patients who had been well controlled on Concerta for a long time who suddenly were not able to focus, were more angry, and had other focus and behavior problems. Initially I had no idea there was a new generic, but one mother sent me a picture of the new pill and I knew instantly it could not be the same.

Now I've heard there will be new generics from Trigen Laboratories, Mylan and Impax Laboratories that do not use the special delivery system of Concerta once again. I'm worried because it took many many months of people filing reports with the FDA through MedWatch before the FDA finally stopped allowing the substitution. I hope the newly approved versions work better than the previous editions, but am worried not only because they don't use OROS technology, but there are several new versions coming to market and each could be different.

I have heard that the previously available OROS generic (made in the same factory as the name brand Concerta and the same exact pill but with a different label) will no longer be available. If this is true, options will be to pay for the name brand or go with a new version of the medicine.

Concerta is the branded formulation of methylphenidate HCl Extended Release that has a unique time release system. This time release technology is called OROS (osmotic controlled release oral delivery system). Unlike many slow releasing medications that are released as the capsule parts dissolve, the OROS capsule doesn't dissolve. There is a little active medicine that is released immediately and then the medicine is slowly released through a small hole in one end of the capsule. The pill works like a pump, pulling in water from the intestines, pushing the medicine out of the tube slowly throughout the day. This allows for a consistent drug release. See this photo from Medscape:


You can tell if you have the OROS tablets if they have a small dimple in one end: The same active ingredient (methylphenidate) is used in the new pills. I have heard that at least one version of the pills is round, so I know they don't use the OROS system. I cannot tell what type of delayed release they will have based on the information in their package inserts.

I find it very frustrating that each of the package inserts appear to be nearly identical to the one for Concerta (including the initial US approval date of 2000, which is not correct for this form). Older warnings, including a contraindication in those with tics, has been found in newer studies to not be a contraindication. The fact that they did not push to remove it makes me wonder if they did not want to have to change other parts of the document.

Figure 1 and Table 6 are identical with the exception of changing the word "CONCERTA" to "methylphenidate hydrochloride extended-release" and Trigen added an easy-to-read table format:
Concerta
Trigen's Methylphenidate HCl ER 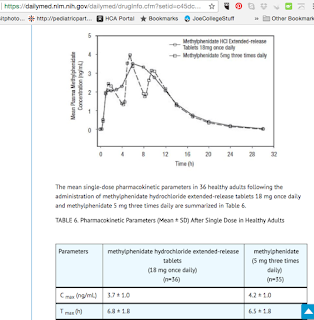 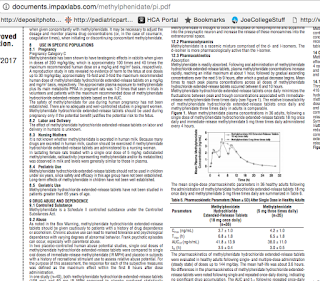 This makes me wonder if they were somehow able to get permission to make their new tablets based on Concerta's data, not their own.

We'll see how it works in people who have previously taken OROS methylphenidate ER. Sadly, one version might work better than another, so you will have to keep track of which brand you are using.

What's good about the new generics?

If it's true that the currently available generic OROS form of methylphenidate ER is no longer going to be available, it's good that there will be other options to help keep costs down. Maybe. Sometimes insurance companies prefer branded products. It's all how they contract the cost. If you don't know how to use your insurance company's prescription formulary, you should learn. Also check out GoodRx for pricing information.

One might work as well (or better) than the OROS formulation in any individual. You won't know until you try it.

One benefit I am excited about if these work:

The Trigen version is available as a 72 mg tablet. The original Concerta is not able to be made at that strength. You can see from the photos above that the pills get bigger with increasing dosages, and the OROS system has limits to how much it can hold. For people who need 72 mg, they must take two of the 36 mg OROS tablets. Since patients pay by the pill and they need 60 pills/month instead of 30, this can be quite a bit more expensive.


What should you do if the pills change - especially if they don't work?

Check each bottle when you pick up new medicine and ask if you can return unused tablets if they don't work for any reason.

Keep track of what each pill looks like and the brand (which should be on the label) so you know which versions work and which don't.
Talk to your kids about how they think and feel on and off their medicine - some will be more in tune with themselves than others.

Keep in touch with teachers as the pills change so you know if there are school-related issues you're not seeing at home.

If the pills don't work or have new or worsening side effects:

In each of the above situations, include why your family member needs the OROS technology. Give examples of how it works better than the other extended release methylphenidates and why the amphetamine class of medication failed (if tried).

If you need to change medications because the new generics don't work well, it helps to know what other medicines are in the same class so you can look up your formulary coverage. The ADHD Medication Guide has an easy-to-read format of ADHD medicines. Just look for other medicines in the same colored box as Concerta to find similar drugs. (To limit plagiarism of this wonderful chart, you must click on the user agreement in the center of the page. It is free and easy.) Medications have been arranged on the card for ease of display and comparison, but dosing equivalence cannot be assumed. Talk with your doctor about what medicines will be best for your child (or yourself). *The ADHD Medication Guide was created by Dr. Andrew Adesman of the North Shore-LIJ Health System.