Parents often worry about lumps and bumps on a baby's head unnecessarily. Babies normally have ridges and soft spots on their head for a while after birth. Many have a type of swollen gland that parents can feel when rubbing the head. 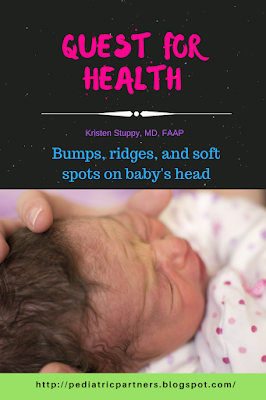 All of this is normal.

Let's begin with a brief overview of a baby's head. We are born with many bones in our skull. This allows the head to be squeezed out of the birth canal as the boney plates move together or even overlap one another.


Sometimes you don't really notice much with these bones, but other times they still overlap one another noticeably after birth. A baby might have a cone shaped head after birth, but this usually quickly reshapes into a round head over a couple days.

There are 1-2 "soft spots" at birth. Usually the one on top to the head (the anterior fontanelle) remains open enough to feel for the first 18-24 months of life. The one towards the back of the head (the posterior fontanelle) is unable to be felt by about 2 months of age. Many parents fear that touching the soft spot will somehow damage the baby's brain. Normal touching won't hurt, even from a 2 year old sibling. There are several layers of skin and other tissues protecting the brain. Doctors will feel the soft spots during routine check ups to be sure they are the right size for the growth of the baby's head. (There's a lot of variation here, so if you question the size of your baby's soft spot, discuss it at a visit with the doctor. He or she will need to not only feel the soft spot, but also will look at overall head growth, baby's development, and the shape of the head.)

Coming out of the birth canal can be traumatic for both mother and baby (and often for fathers too). Sometimes babies have a big soft or squishy bump on one side of the head, which usually is essentially a large bruise. The two most common causes for this are cephalohematoma and caput saccedaneum. A cephalohematoma develops when there is bleeding between the skull and the bone lining called periosteum. Since it is outside the skull, it doesn't affect the baby's brain. It covers only one of the bones, and never crosses one of the suture lines. A caput is from bleeding one layer above the periosteum in the skin. It can cross the bone areas since it's not limited by the lining of the bone (periosteum).  Both of these conditions can lead to increased risk of yellow jaundice due to breakdown of the blood collections, but usually self resolve without complications. If baby seems uncomfortable due to this area, discuss with your hospital nurse or doctor.

This picture attempts to show the layers of bleeding described here and includes more uncommon (and more concerning) types of bleeding.


Flat spots are common, especially if babies prefer to always look to one side. This can cause the forehead to seem to bulge on one side or an ear to appear closer to the face than the other ear. This is usually due to baby laying one direction most of the time, allowing the brain to grow all directions but spot baby is laying on. It is important to get baby to lay looking right sometimes, left other times. Supervised tummy time is helpful too. (I recommend starting tummy time day one. The earlier you start tummy time the less they seem to hate it!) When you hold and feed baby, alternate arms because they will look toward you and by simply holding in the right arm sometimes, left arm other times, they will turn their head. If your baby resists turning his head, check out this Torticollis information.

One of the most common head worries that brings parents to the office is a pea-sized (or bigger) movable bump on the back of baby's (or even an older child's) head. This is usually an occipital lymph node. When I say it's just a lymph node, some parents automatically worry about lymphoma. Don't go there. Most of us remember having a swollen lymph node (AKA swollen gland) under our jaw or in our neck when we are sick. When they develop on the back of the head, it is usually from something irritating the scalp, like a scalp probe during labor, cradle cap, or bug bites in older kids. They can remain large for quite a while (often seeming to come and go when kids have scalp irritations), but unless they hurt to touch, enlarge rapidly, are red and hot, or a child looks sick otherwise, I don't worry about them.


In short, most lumps and bumps on your baby's head are normal. If you're worried, bring your baby in to have your pediatrician look and feel.