Headlines recently have announced that a common treatment used for constipation is being studied for safety in children. Several parents have asked me about it, and I know many more are probably worried but just haven't asked yet, so I thought I'd share my thoughts on the subject. 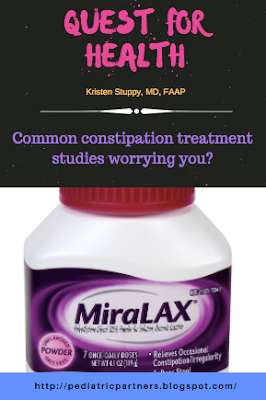 This common treatment, polyethylene glycol 3350 or PEG 3350 (brand name Miralax), has been used by many kids over many years -- often for long periods of time. It works well and is my first choice of medical treatments if dietary and habit changes don't help a child's constipation, and while they're working on dietary and habit changes. It is well tolerated by kids, unlike most other medical treatments. It has been used since 2000, and since I finished by pediatric residency in 1999, I can remember the alternatives we used previously. Many of them were difficult to get kids to take due to poor taste or grittiness. When Miralax was first available, treatment of constipation improved significantly due to the tolerance and acceptance by kids.

Very common. It causes pain, poor eating habits, fear of toileting, and sometimes even ER trips and CT scans. It can last months to years in some kids, so it is not a minor issue when kids suffer from it. I encourage first changing the diet, but if that fails, or if it is too significant of a problem, PEG 3350 is my go to medicine. I have recommended it for years without any known side effects or complications, other than the kids who have too loose of stools on it, which usually responds to continuing the medicine to release the large stool mass that has built up.

I was quite surprised to see that researchers are starting a study on the drug. It surprised me not only because I've never heard valid concerns about the safety or efficacy of the medicine (I have seen some really weird stuff online, but nothing that is valid), but also because I've never seen headlines that a study is starting. Usually headlines report results of studies. Why is this hitting the press now? I have no idea.

What does the research show?

I have recommended PEG 3350 for many years without concerns for safety -- first as a prescription medicine and now as an over the counter recommendation. As a pediatrician I know that many (if not most) of the medicines we use in children are not tested in children before they come to market. This is due to many reasons, but I suspect the biggest is cost. If a drug company spends money getting a medicine tested in adults and then again in kids, it doubles their cost. Historically once something is approved in adults, physicians start to use them in children. New rules encourage pediatric testing, but all the drugs previously used in children will not need to undergo this testing.

Many of the news articles say that studies have not been done in children, but this isn't true. This 2014 research article reviews the history of PEG 3350 and compares to other medicines used in pediatric constipation in addition to showing safe blood electrolyte levels while on PEG 3350 long term. In 2001 a study was published showing safe and effective pediatric dosing. A 2003 study showed safety and better tolerance than previously used medications for constipation. A study specifically looking in children under 18 months of age showed safety. A 2009 Canadian study shows its safety in children. If you look at the references of any of these studies, you will find more. The only side effects noted are related to diarrhea, cramping, bloating -- all things that would be expected with a large stool mass blocking the new, softer, water filled stools from coming out. Once the large stool mass is out, these symptoms resolve.

It's a water-soluble, inactive ingredient that is not absorbed from the gut in measurable amounts. It binds to water, which keeps water in the stool, softening the stool. From what I know, it is non-toxic and has no effect on the body. The first branded product, MiraLax, was somewhat misnamed because it is not a stimulant laxative. It does not interact with the muscular propulsion of the gut. It is an osmotic laxative, keeping water in the stool, which makes it softer and easier to pass.

PEG is used in many products, not just stool softeners. It is found in ointments and pills to allow them to be more easily dissolved in water. PEG can also be found in common household products such as certain brands of skin creams and tooth paste.

What is the FDA approved use of PEG?

PEG 3350 is approved for treatment of constipation in adults for up to 7 days. Approval is based on studies available at the time a medicine is approved. Companies generally don't invest money in studies to expand uses after approval because they know that the products will be used in broader ways without the specific indication. They don't want to spend money they don't need to spend, which makes sense from a business perspective. Many commonly used medications are not specifically FDA approved for use in children less than 16 years due to difficulties and expense in testing drugs on minors.

How do we know it works?

There have been several studies in children and the collective experience of pediatricians around the world showing improved tolerability over other treatments for constipation because PEG 3350 has no taste, odor, or texture. It has been shown to be either as effective or more effective than other constipation treatments. See the links to these studies above. Until children can keep stools soft with adequate amounts of water, fruits, vegetables, and fiber, long term use of PEG is well tolerated.

How long can PEG be used in children?

This is a very difficult thing to study because the longer a study follows their subjects, the more subjects are lost to follow up. There have been studies of up to 30 months that showed safe use. Blood electrolytes, liver and kidney tests were all reassuring that PEG is safe during the study. Pediatric gastroenterologists and general pediatricians have often recommended even longer periods of time without any known side effects.

What is the new study looking at?

The FDA is looking at the safety of other molecules in the PEG 3350. PEG 3350 is a very large molecule that ins't absorbed by the gut, but there are concerns that smaller compounds could be found as impurities in the manufacturing process of PEG 3350 or formed when PEG 3350 is broken down within the body. The FDA is investigating if these smaller compounds are absorbed by the gut and accumulated in the bodies of children taking PEG 3350. Some families have reported concerns to the FDA that some neurologic or behavioral symptoms in children may be related to taking PEG 3350. It is unclear whether these side-effects are due to PEG 3350. This study is the first step towards trying to determine if there is truly a link.

I cannot stress enough that the studies are not completed yet, so it is much too soon to say if there will be a link or not. I have years of experience with many children, and I have not seen any neurologic or behavioral problems caused by PEG 3350. It is important to note that many children with neurologic or behavioral problems are more likely to become constipated, so are more likely to need a medical treatment for constipation. This is an issue that pre-dates the medicine, so it is not caused by the medicine. Generally if the stools are softer, you can more easily work with the behavioral issues causing the constipation, such as loss of appetite/poor diet and failure to sit on the toilet long enough to empty the stool from the rectum. If you decide it is time to stop the medicine, be sure to discuss this with your child's doctor to keep them in the loop about how things are going!

Thank you to a Facebook post by Dr. Johns, a pediatric GI fellow (in training to be a pediatric gastroenterologist) for sharing this link to the 2014 guideline for constipation diagnosis and management from the European Society for Pediatric Gastroenterology, Hepatology, and Nutrition and the North American Society for Pediatric Gastroenterology, Hepatology, and Nutrition: Evaluation and Treatment of Functional Constipation in Infants and Children: Evidence-Based Recommendations From ESPGHAN and NASPGHAN. In short: not many studies are required to diagnose functional constipation after a thorough history and exam. The common things we recommend (fiber, water, probiotics) don't have any proof that they work. There is evidence that PEG works.
Posted by Unknown at 11:29 AM