Generic Concerta Not Working Like the Brand Used To?


I used to be a huge fan of generics. They save money, right? They are equivalent to the brand name, right?

That's what I've always been taught and what I teach taught.

I've been jaded by many problems and now disagree with the above.

Some generics are not equivalent to the name brand.

A recent discussion on a psychology/pharmaceutical listserv I follow brought up the issue of generic Methylphenidate HCl not working as well as the brand name Concerta. Several members had some great insight into why this is. The discussion peaked my interest in the issue and I started looking online for information earlier this week.

Ironically today I went to pick up a family member's medicine. We have filled at the same pharmacy previously for generic "Concerta" and have always gotten the equivalent generic. When I looked at the pills in the bottle today, I told the pharmacy tech they weren't OROS (see below). She looked confused. She had no clue what I was talking about.  (Lesson to all: if you have any questions, ask to talk to the pharmacist. Hopefully they will understand the pharmacology better than the tech.)

Generics for Concerta (Methlyphenidate HCl) might have the same active ingredient, but have a completely different time release system, resulting in varying drug peaks in the bloodstream. The original generic for Concerta (from Watson pharmaceuticals) uses a special technology to time-release the active drug. This time release technology is called OROS (osmotic controlled release oral delivery system). There are several other time release methods. The active ingredient may be imbedded in various substances from which the medicine must exit slowly or a gel cap is filled with beads that dissolve at different rates. With the technology used by Concerta, the capsule IS the time release. It doesn't dissolve. The medicine is slowly released through a small hole in one end of the capsule. The pill works like a pump, pulling in water from the intestines, pushing the medicine out of the tube slowly throughout the day. See this photo from Medscape.

I have recently learned that not all generic formulations of Methylphenidate HCl are using this technology. This alters the time-release nature of the active medicine.  For some people this substitute might be just fine, or even preferable. But if it seems like your medicine isn't lasting long enough, has times that it works well followed by times it doesn't until the next peak, or any other problems -- check your pills!

You can tell the difference by closely looking at the capsules. The OROS capsules are a unique shape, a little more blunted than a standard capsule. If you look really closely at the ends, you will find that one has a "dimple" where there is a small hole covered by a thin layer matching the rest of the capsule. I just happen to have at least one of three dosages: 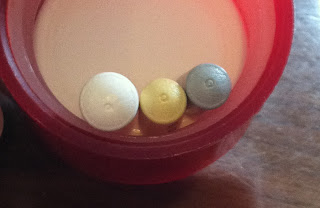 Photos of the Mallinckrodt brand are now listed under "Updates."

So if any medicine doesn't work like it used to, look closely at the pill itself to see if it is the same as previously. If you don't have any left, ask the pharmacy for the company / maker of the medicines you've filled over the past several months. Let your doctor know if you can't use a substitution so they can specify "Watson brand only."  If the new "brand" works better, be sure to ask for that manufacturer.

Better yet, call ahead and see who the manufacturer is of the generic for Concerta sold at your pharmacy. Watson Pharmaceuticals is the one that makes the OROS system. If they don't use that generic and you plan to shop elsewhere, be sure to let them know why!


Reporting Adverse Events: A pharmacologist from the listserv I mentioned above suggests that if you have an issue with the duration of action of a different brand of Methylphenidate HCl you should report it to the FDA. This will allow them to review cases and possibly stop the substitution of these non-equivocal products. Click on this link for the MedWatch Report. Thank you SS!


Photos of the Mallinckrodt pills (from www.mallinckrodt.com):

As a comparison, the pill shape of the OROS pills (Janssen Pharmaceuticals, McNeil, and Watson all look identical -- from www.goodrx.com): 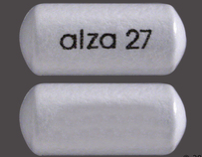 I just learned another company is making a generic for Concerta. A patient suddenly found the medicine to be not effective. It looked entirely different, so suspected it was the wrong medication. The pharmacist confirmed that it is another generic for Methylphenidate HCl ER from Kremers Urban Pharmaceuticals. The parent sent me this picture of the 18mg pill and I found the 27mg on the Kremers website: 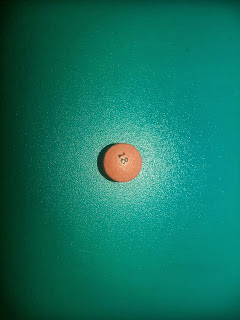 If your pharmacist says he can't order a drug because of a shortage, you can check to see predictions of how long the shortage will last at ASHP.org. Be sure to look closely for the generic name and if it is an extended or immediate release form because it can be confusing.

Watson Pharmaceuticals will now be called Actavis, so ask for the OROS pill instead of a brand. I think I will do a whole new blog on this topic since there are so many updates since April. Watch for it!

This is a great resource on the difference in authorized vs true generics: An Update on Generic Concerta.

I'm excited to hear that the FDA has this issue on their watch list. Please read Gina Pera's We Did It! Concerta Generics on FDA Watch List.

Generics that are non-OROS will no longer be automatically substituted. They will still be available. See ADHD Roller Coaster's blog on the topic for details.

The Pre-MMA 180-Day Exclusivity Punt? What Gives? A legal blog explaining how medicines lose their exclusivity and can become generically available, specifically the Concerta dispute.

How To Tell The Difference Between Concerta and Generic Concerta A Canadian ADHD blog provided the picture of how to recognize the difference. Generic formulations have been available in Canada years prior to in the US.

Special thanks to the members of the Child-Pharm listserv!
Posted by Unknown at 11:09 AM