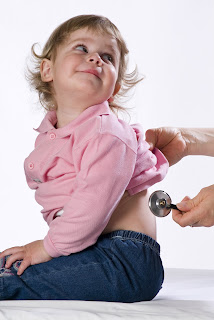 When kids are sick, parents understandably want them to feel better quickly. They want a sound night's sleep. They want to be able to return to work/school. They want to see a happy, healthy child again. They come to our office hoping for answers and a cure.

Sometimes there is no quick fix, just treating symptoms and time.

This is the season we are seeing a lot of sickness. It's been about 11 years, but I remember the frustrations of having a sick baby when my daughter had bronchiolitis. Some of the details are muddy, but I remember the feelings of inadequacy because I couldn't help her feel any better any faster. I knew the illness tends to get worse before it gets better and there is little we can do to alter its course, but knowing this it didn't make me feel any better as the mom who was helpless.

I lost sleep for several nights as I watched her pant (not breathe, but pant). I resorted to giving asthma-type breathing treatments (because my son had wheezing so we had everything we needed to give a treatment at home) despite the fact that they didn't seem to help her much. It was probably the humidified air that helped more than anything. But the vaporizer in her room and the saline to suction her nose wasn't helping, so I wanted to at least try the asthma medicine. She kept wheezing. We brought her in to the office 3 days in a row to have someone else check her. I can't check oxygen levels at home and needed someone to objectively examiner her.  So three days in a row we went in for repeat exams. She was able to maintain her oxygen level and stay hydrated despite breathing 60-70 times/minute for days. I still don't know how. I remember wishing her oxygen level would drop enough that we could hospitalize her, not critically, just enough. Then she'd be on monitors, and maybe I could sleep a bit knowing someone else was watching her. Thankfully she never got that sick, and eventually we were all sleeping again, but it took a long time for that.

So I understand the frustration when we tell parents things to do at home and ask that they come back in  __ days or if ___, ____, ___ symptoms worsen. It really isn't that we are holding out on a treatment that will fix the illness, it's just that we don't have a quick fix for many illnesses. We need to be able to examine at different points in the evolution of the illness to get a full picture of what is going on.

The exam can tell us a lot, but it doesn't predict the future. One minute ears can look normal, the next they develop signs of an infection. I cannot say how many times I've heard a parent complain that someone else "missed" something on exam that I now see. Yes, sometimes things can be missed, but I suspect that most of the times the exam has simply changed.

I learned this phenomenon as a resident on the inpatient unit. I had a patient who had been admitted for an abdominal issue. I did a physical on the child in the morning before rounds, including looking at ears, which were normal. Late that afternoon the nurse called because a fever had started. New symptom, so another exam was done. This time the ears were red and full of pus. Within hours this child had developed a double ear infection. I examined the ears both times and they were definitely different.

I understand the frustration (and expense) to take kids back in to be seen if symptoms worsen, change, or simply just don't resolve at home. If symptoms change, we need to re-evaluate, which includes an exam. Medical providers cannot look into the future to see what will develop. It is not appropriate (or effective) to put kids on an antibiotic or iv fluids to prevent the illness from taking its natural progression. Sometimes we need time to see how the illness progresses to see what other treatments might be needed.

When parents call back and want something else done, they are often upset that we want to see the child again. I hear many types of complaints.


Money is probably the biggest issue. It is not because we want your co pay. The "we" I use here is not just my office and I am not speaking of any particular situation. With online doctor rating sites, social media sites, and knowing doctors around the country, I write with many examples in mind. I've seen online complaints that doctors are just money hungry, trying to get someone to come back in just so we can charge more money. It is true that we charge for every visit. We are not able to waive the co pay because we did "something wrong" or "missed a diagnosis" the first time. Each is a separate visit with updated information and a separate exam. Insurance contracts dictate that a separate co pay is charged. We must adhere to legal contracts or it would be considered insurance fraud.

Increasing our numbers for "production" is sometimes brought up. It is not because we want to fill our waiting room with more children to increase the waiting time for everyone else. We don't want to waste your time or ours. But we need to see a child to know what is happening at that moment to be able to give any valuable advice and treatment.

We want to see your child again because we need to see your child to know what to do. Maybe now the child's symptoms have changed.  Maybe not, but without the history and exam we do not know. The exam might now show wheezing, low oxygen levels, a new ear infection or sounds of pneumonia. Sometimes the exam still is overall normal, but the fever's been going on long enough without any identifiable cause, which requires lab and/or xray evaluation.

Please remember that if you get a different answer at a different visit, it doesn't mean that the first assessment was wrong. Usually it is due to a progression of the illness, and things change. Human bodies are not static.