I see several kids each year who pull hair from their scalp, eyelids, or eyelashes. This is called trichotillomania (sometimes shortened to trich). Because I see families struggle with this and other similar issues, I am breaking my general rule of blogging within the realm of standard guidelines and am going outside of conventional medical advice to talk about an interesting new treatment that is showing positive benefit with studies (many of which are linked into the post). I say this only to caution the reader that you should discuss this with your (or your child's) doctor about it and to remind you not to take this (or anything else I write) as medical advice.

Trichotillomania is more common in children who have anxiety, and it can also lead to more anxiety from the social isolation and bullying that result from hair loss. It is a vicious circle where the self-inflicted hair loss is in itself distressing, but that distress leads to more pulling. You can see from the following picture that cutting hair short is not an effective treatment. Skin picking and nail biting are similar body focused repetitive behaviors (BFRB). 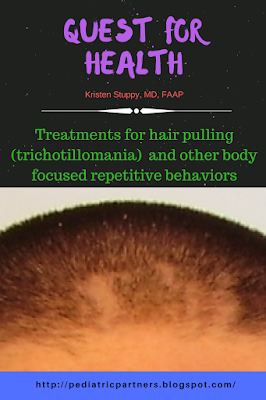 What help is available?

The first treatment recommended for trich (as well as other body focused repetitive behaviors- BFRB) is therapy. Treating BFRB should involve cognitive behavioral therapy or habit reversal therapy from a trained therapist with experience in this issue. During therapy they will learn to identify emotions, label them, and appropriately address them. In habit reversal therapy they learn to do another action instead of the hair pulling (or nail biting/skin picking). This might mean clenching fists, playing with play doh, or another activity. Family support can help ease the anxieties that are caused by the behavior itself and it is important that family members praise the positive steps along the journey. There are support groups available in many areas.

Are there supplements that help?

A relatively new development in the treatment of trichotillomania and other BFRBs is a supplement called N-acetylcysteine (NAC), a glutamate modulator. NAC is available over the counter in stores that sell supplements and online for a relatively low cost. How NAC might work is not completely understood and well beyond the scope of this blog, but is reviewed in the Journal of Psychiatry and Neuroscience.

I've been recommending NAC for awhile now for trichotillomania (as well as nail biting and OCD) and have had mixed response, but overall positive. For those who did not find it helpful, I suspect they did not use it long enough since it can take over a month to see benefit. I think parents like the fact that it is a supplement, which is easier to provide than behavioral therapy, but therapy is still an important part of the treatment. Those who have the best results do therapy along with the supplement.

How long does it take to see results with NAC?


It takes about a month or two (studies show 4-9 weeks) of NAC to show benefit. Taking a supplement for that length of time without benefit can be difficult and might cause some to quit prematurely, but I'd recommend at least two months before deciding it doesn't work. Talk with your child's doctor before starting any supplement and before stopping it.

How much NAC do you give?


Most studies have been done in adults, so the best pediatric dose is not known. For adults and children over about 45 pounds, 600 - 2400 mg has been studied, but no ideal dose is known. It has been suggested about 60mg/kg/day for younger children, but there is no standard dose.

It may also be difficult to give to a child who cannot swallow the capsules. While in theory the capsule could be opened (and the powder is available in bulk), the taste and smell is of rotten eggs, so I cannot imagine a child taking it mixed in food or drink. Tips on teaching kids to swallow pills is covered here.

Talk with your child's pediatrician before beginning any supplement, even though they are sold over the counter. This helps your child's doctor know more about what is going on, what works and what doesn't for your child, and to help monitor for possible reactions if they are known (especially if your child is on prescription medicines).

Is NAC safe with other medicines?


NAC might interact with other medicines, so it is recommended to discuss interactions with your doctor and pharmacist. Since antidepressants are often used in anxiety disorders such as trichotillomania, I have tried to see what interactions might be known. Research has shown that rats need lower doses of imipramine (a tricyclic antidepressant I don't use in kids) and escitalopram (Lexapro, an SSRI antidepressant) when taking NAC, but NAC doesn't affect the dose of desipramine (another tricyclic antidepressant) and bupropion (Wellbutrin). In contrast, NAC in the rats actually made fluoxetine (prozac) less effective, so higher doses were needed. Obviously people are not rats, and this is an area that needs to be further studied, but if your child is on any prescription medicines, be sure your doctor and pharmacist know that he is starting NAC.

If anyone knows of human studies or more information, please post in the comments below!

How long will NAC be needed?


It is thought that NAC is safe long term and might be needed long term since the underlying anxiety does not go away, only the symptoms are controlled with the NAC. This is an important reason to do the therapy too, since learning techniques to identify and appropriately deal with stressors can help life long without side effects. When NAC is stopped, symptoms might return. I will often suggest a trial off NAC once all habits being treated have been gone for at least a month. Weaning to a lesser dose for a few weeks is one way to test without going completely off, and I find many families feel more comfortable with a wean versus sudden stopping. If symptoms resume, restart the NAC. (Note: This is my own version of what to do -- I have not found guidance in the studies I've read. If anyone knows anything more specific, please comment below so we can all learn!) I did see one case report of a person treated for 6 months with NAC and the symptoms did not return for a full month after stopping NAC.

Side effects are rare, but may include gastrointestinal upset, diarrhea, nausea, rash, vomiting and fatigue. One study of AIDS patients used 8000 mg of NAC per day, showing overall safety at high doses. This is NOT the dose recommended for hair pulling, skin picking, and most psychiatric and neurologic disorders. Some studies suggest kidney stones are more common at higher doses, but taking high doses of Vitamin C at the same time as each NAC dose can help prevent kidney stones from forming. A supplement of Vitamin B6 has also been recommended by some because NAC increases the body's use of Vitamin B6, but most children can get plenty of this vitamin from a healthy diet. Many foods are rich in B6, including fish, beef, poultry, fruits (not citrus fruits), vegetables, and grains. Vitamin B6 is also in most multivitamins, so if you choose to supplement, a standard multivitamin would be considered safe. Talk with your child's doctor if you plan on doing mega doses of vitamins, as that can sometimes be harmful.

What else is NAC used for?


When I was a pediatric resident, we used NAC for acetaminophen (Tylenol) overdoses. I hadn't thought of it for many years, then a few years ago I started to hear of it being used for other things. Research for using NAC for a variety of psychiatric and neurologic disorders in addition to trichotillomania is promising. There is evidence that NAC works for some symptoms involved with autism, Alzheimer's disease, cocaine and cannabis (marijuana) addiction, bipolar disorder, depression, nail biting, skin picking, obsessive-compulsive disorder, schizophrenia, drug-induced neuropathy and progressive myoclonic epilepsy. Disorders such as anxiety, attention deficit hyperactivity disorder and mild traumatic brain injury also have preliminary studies supporting NAC use but require larger confirmatory studies.

I do not typically recommend any brand over another, but supplements present a problem due to the lack of regulation. Investigations have shown that there is variability of what is actually in the product from bottle to bottle. I recommend Swanson Vitamins. During the study on BFRB’s done by Jon Grant, MD, JD, MPH, Swanson products were used because they were the only company in the US that would provide a certificate of purity and batch to batch sameness. For this reason I recommend Swanson’s for NAC as well as their other products if you will be taking a supplement.

Update 11-3-17: I just heard of an effervescent tablet that gets good reviews from specialists. PharmaNac has 900 mg per tablet, and their website recommends 2-4 tablets per day. Note: Their website mentions a potential issue with some antibiotics and NAC, but those claims have been disputed. It would not be wrong to separate dosing of antibiotic and NAC, but it might not be an issue.


For more information, see Experts Consensus Treatment Guidelines for Trichotillomania and Skin Picking and the many other resources found on The TLC Foundation for Body-Focused Repetitive Behaviors.

KidsHealth has a Trichotillomania page for teens.
Posted by Unknown at 10:13 AM