Rashes in kids... a few case studies for parents

I am not a dermatologist, but I see rashes all the time. Some are easy to identify, others I'm not sure what the cause is. In general physicians are taught to treat the symptoms of a rash. The standard dermatology lecture in a nutshell is: If it's wet, dry it. If it's dry, wet it. If it itches, use steroids. If it's infected, use antibiotics.

I'll go over a few made up case studies -- each one is a conglomeration of kids I've seen.

Parents bring Itchy in for a well visit but mention that her skin has rashes on her elbow creases and behind her knees. Sometimes she scratches them to the point where they bleed. They've tried applying a pink fragrant lotion that they got as a baby gift, but she says it burns and didn't help.

Advice for this family would not include which of the following? 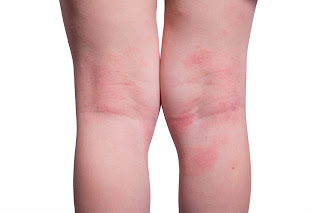 The answer is #1. This rash is most likely eczema, a fancy term for dry skin. It often develops in infants but improves as a child gets older. It is more common in kids with allergies and/or asthma. It can worsen with exposure to irritants (such as a fragranced lotion or soap) and allergens (food allergies and seasonal allergies). I've often heard this called "the itch that rashes". Scratching damages the skin, which allows water to escape, which dries the skin more, leading to more itching. This itch/scratch cycle worsens the rash and can lead to secondary infections. This can be a very frustrating condition because it will come and go for years in some kids. It's important to avoid irritants and use proper skin care. For more treatment, visit Dry Skin / Eczema / Atopic Dermatitis.

Parents bring their infant in for her well visit and ask about a rash that's been there "for awhile" but doesn't seem to bother Baby. They aren't sure when it started. They can't recall any new soaps, lotions, foods, or other potential triggers. They describe it as red spots and they aren't sure if they're changing over time. Baby is eating well, gaining weight well, sleeping well, and not fussy. On exam, they show me the rash on the abdomen and arm, but I cannot see any red spots.

The answer is #4 and yes, I see this non-existent rash all the time. It's not just my old eyes that can't see it -- I hear from pediatrician friends about this phantom rash too. I know parents worry more about their children than they worry about themselves, but sometimes they can realize the unfounded concern when I simply ask what they would do if this rash was on their own skin. Most say they wouldn't worry about it. Enough said.

Parents ask about a rash that appears sometimes after their school aged child showers. It doesn't itch or hurt. It is always on the chest and abdomen and sometimes on the legs. It looks like red splotches. They've tried various soaps and shampoos, but changing them doesn't seem to affect the rash. It isn't present on exam because it only happens after showers and lasts less than 30 minutes. They are concerned because it returns so frequently.

My advice to parents includes which the following?

The answer is # 4. Again, I've been asked this type of question more than once. It also falls into the category of "What would you do if you had this rash?" Most parents would admit they wouldn't do anything since it didn't cause any problems and was brief. If they really think about it, they probably have had this "rash" after a hot shower. It's just flushed skin. If you enjoy a hot shower, it's okay if your skin flushes a bit.

Mom brings Kiddo in because her nails are growing "funny." They have a horizontal crack and the tips are peeling off. They don't seem to hurt or bother Kiddo.

What further information would be important to know?
The answer is #5. The answer is usually in the patient history with this one. I've seen a number of kids with peeling nails recently because we had hand, foot, and mouth in the area about a month ago. Not all kids with that infection lose their nails, but it can happen. For more on this, including pictures, see Four Cases of Onychomadesis after Hand-Foot-Mouth Disease. Other causes of peeling nails include trauma and nail picking, nutritional deficiencies, nail products, chemical irritants, certain medications, infections, and chronic diseases.

Mom brings Snotty in because he's had a runny nose all week. On exam, he's found to have what mom thought was dried mucus under his nose, but the underlying skin is red and it's actually more of a crusting, not mucus. 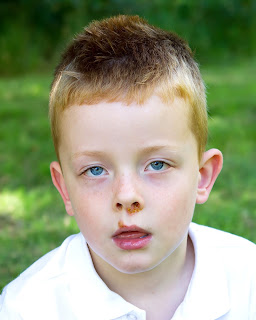 Treatment of this includes all except:
The answer is #1. That would hurt! This is a classic case of impetigo. Impetigo is a bacterial skin infection. It often happens when the skin is damaged (in this case from Snotty wiping his nose constantly) and if bacteria from the nose or mouth get into the skin. It can be treated with prescription topical antibiotic ointment in most cases, but some cases require oral (by mouth) antibiotics. Wash the area gently and soak crusts with warm wet cloths to help remove the crust. Complete removal of the crust isn't necessary though - that will happen naturally as the infection resolves. Touching the area can spread the infection, so avoid touching it and wash hands well after touching it!