Vaccines don't have to hurt as much as some fear

Many kids are scared of shots. Some even fight parents and nurses when it's time to get shots. The more they fight and worry, the worse it gets. But it doesn't have to be that way. 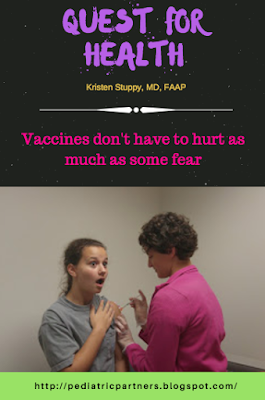 In general there are some things that increase anxiety about shots or just make them seem bad. Lying about shots or threatening them as a punishment are never a healthy approach to the situation.

Some kids do best if they don't know shots are coming. If they ask if they'll get shots at an upcoming visit, you can say you don't know. If you think your child will lose sleep for days worrying about the shots, this is often the best way to handle it. Then the doctor and nurse at the office can deliver the news and it isn't your fault.

Some kids do better with advance warning. If you want to prepare your kids before bringing them in for shots or if you just need some help when you're at the office, follow these tips:

Help with anxieties in general (great for life worries, not just shots!):

Vaccines are a pain: What to do about it (This includes a link to this parent tip sheet.)