If a child's temperature is usually low, how do we define fever?

My child typically runs a temperature around 97°F, so if the temperature is 99°F, is that a fever?

We get a variation of this question all the time.

Sometimes it's the opposite, such as my child usually runs hot, so can you write a note saying 101°F isn't a fever for him?

Short answer (both questions): No.


Long answer: Our body temperature is very complex. Your school district will define a fever with a number, but your doctor might have a different number. A fever is not defined by the change from a person's baseline temperature.

Disclaimer: All information on fever given is for healthy, vaccinated children over 3 months. Young infants, children with chronic disease, or undervaccinated kids do not apply to standard fever discussion and advice. 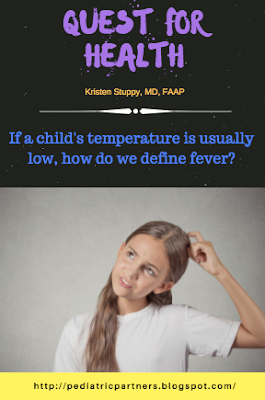 Most people think of a "normal" body temperature as an oral temperature of 98.6°F. Your temperature may normally be a degree or more higher or lower, which means 99.6°F is normal despite the fact that some daycares define this as a fever. Most often we associate high body temperatures with illness, but elevated temperatures also can be caused by environment temperatures being too high (or over bundled babies), dehydration, medications, poisons, cancer or overactivity. Your normal body temperature changes by as much as 1°F throughout the day, depending on how active you are and the time of day. Body temperature is very sensitive to hormone levels, so may vary with women’s monthly cycles. Our temperature tends to lower as we age - kids tend to have slightly higher temperatures than their parents, even when healthy. It is very common for children to get a fever when sick, but less common for adults. And the thermometer itself can vary in readings significantly, so the number may or may not be reliable, depending on the thermometer.

It is said that a child has a fever when his or her rectal temperature is 100.5°F or higher, which is about 99°F under the arm and 99.5°F and in the mouth. [This was edited 6/21/17 after some perceptive pediatricians found a typo.] This is by convention, but in actuality children’s normal temperatures may be higher than adults so these temperatures might be normal and only higher temperatures may actually indicate fever.

Parents often use the term "low grade fever" to indicate something less than 100.5°F. There is really no such thing. It's either a fever or it's not. A low fever in my mind means a temperature over 100.5°F that doesn't make the kid feel pathetic. Any temperature less than that simply isn't a fever. The child might be sick and temperature doesn't define illness, but it's not a fever.

There also isn't a medical definition of high fever. The temperature is the temperature and illness is better defined by describing all symptoms, not just the temperature. I guess if I had to define a high fever, it would be one that makes a person feel absolutely miserable. There is no magic number that defines this high fever or that tells us when to worry more. It's more important to look at the child than the thermometer to know if they're really sick or not.

Many parents have fever phobia, a condition where they worry that the fever itself will do damage. While a rapidly increasing temperature can cause fever seizures, these are more scary than dangerous. Fever seizures can occur with relatively low fevers if the change in temperature is rapid. It's not necessarily the high high temperatures that cause seizures. The brain will not be permanently damaged from most fevers (even high temperatures), though a fever can be a symptom of serious illness that can damage the brain, such as meningitis. But you would recognize that your child is more sick than the typical illness if they are having symptoms of such a significant illness. You would not use a thermometer to tell you that.

I do not recommend taking a child's temperature frequently. That causes excess worry in parents when the temperature increases by 0.5 degree, which could be a real change or just the thermometer's reading. Respond to your child, and don't rely on the thermometer. Never wake a comfortably sleeping child to take the temperature. Don't use sticky strip thermometers that tell your cell phone if there's a fever (yes, that exists, and it will lead to more parental anxiety than help keep children healthy.) Knowing the temperature helps to know if it is a true fever or not, but it should not direct you to give medicine or not. A temperature can be taken at times you need to know if there's a fever, since schools and daycares have rules to keep kids with fever away (though fever is not the only sign of illness and if your child's sick he might need to stay home despite temperature). It is sometimes helpful to know if a warm or hot child has a true fever, but you don't need to take it every hour to follow the trend with most illnesses. It's not even helpful to see how much medicine brings the temperature down. If a child doesn't improve, you will be concerned regardless of the thermometer reading. Taking a temperature once or twice a day is sufficient. I'd recommend taking it at times that it is likely to be its highest, such as in the evening or when fever reducing medicine has worn off.

The American Academy of Pediatrics recommends treating sick children for comfort, which is typically when the temperature reaches about 102°F or if they have pain somewhere. Not all earaches or sore throats cause fever, but you might consider a pain reliever to help symptoms. Most people feel uncomfortable as their temperature approaches 102°F. Only give fever reducers if the child needs it for comfort because the fever is actually helping the child fight off an infection - don't inhibit the immune system if your child is comfortable enough to sleep and drink without significant pain.

Never give a fever reducer to hide a fever so you can send your child to school or daycare. If they don't feel well, they shouldn't go because they'll spread the illness to other kids. A normal temperature because of a fever reducer does not mean that the child is fever free. You can only be fever free if the medicine has worn off and the temperature remains normal. The temperature should be normal off medicines for 24 hours before returning to school or daycare (or work for adults with fever).

So, with the original question, if a child is usually cooler than 98.6°F, when do they have a fever?

A temperature over 100.5°F is the general definition of fever, regardless of baseline temperature. In practical terms though, parents really want to know if a child is sick or not. You can tell when a child is uncomfortable by looking at him ~ you don't need a thermometer. It is not necessary to treat based on the thermometer reading. It is important to give a fever reducer/pain reliever when the child is uncomfortable so he can drink to stay hydrated and sleep. The goal is not to lower the temperature to “normal”, it's to make the child more comfortable.

If you are concerned about your child's illness, especially if he looks dehydrated, is having trouble breathing, is in uncontrollable pain, has symptoms you think might need antibiotics (such as UTI symptoms or Strep throat), or if the fever lasts more than 3-5 days (depending on age of child and overall symptoms), bring him to have an exam to look for sources of fever.


Fever is...
Evolution of illness
But the snot is green
Adenovirus infections
To Tamiflu or Not to Tamiflu
Tamiflu: Guest blogger Dr. Mark Helm
Urgent cares for routine illness: Yes or No?
New Guidelines for treating Strep throat
Updated sinusitis guidelines
All about ears
Menthol for sore throats and cough
My child's cough sounds like...
Cough medicines: Which one's best?
How long with a cough or cold last?