Every year I have been a pediatrician there has been something that makes giving flu vaccine difficult. (I've previously written about that here, which also includes similar links.)

In recent years (last year being the exception) we have been able to at least start giving the vaccine over the summer, allowing us to vaccinate at least some of the school aged kids before school even starts. It is especially reassurring to vaccinate the college aged kids before they go back to school, because once they're at school it's hard to ensure that they'll get the vaccine. We missed the opportunity to offer shots at summer physicals last year and it did make a difference. Since schools in our area are starting back up less than a month from now and we haven't heard anything about vaccine shipments, it looks like we'll miss the majority of school aged kids this summer too. 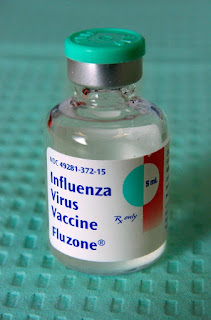 This year we've heard that the FluMist will once again be delayed in shipments. FluMist will not be shipped to distributors until the end of September/beginning of October, and then the distributors will be able to ship the vaccine to everyone nationwide who has ordered it.

Why are the shipments delayed?

There will be three new strains in this year's FluMist, including a more stable version of the type A H1N1. This strain is producing lower yields than expected which is causing the delay.
I have not heard any direct information about when our office should start getting the injectable flu vaccine, but after an online search I did find that Fluzone has been approved for shipment. When we have the vaccine in the office we will start offering it to eligible patients who are in the office. (Eligible means they of the appropriate age and health status for the vaccine.) Once we have enough in stock we will announce flu vaccine clinics. It is too soon to predict exactly when our flu clinics will be available, but hopefully we'll be able to share more soon. I know many of you are asking when they will be, but please be patient and we'll let you know!
Posted by Unknown at 9:23 PM