Menthol for Sore Throat, Colds and Coughs... Should we use it?

I am often asked about the use of Vick's Vapo Rub (or other menthol products and refer to all brands in this post). 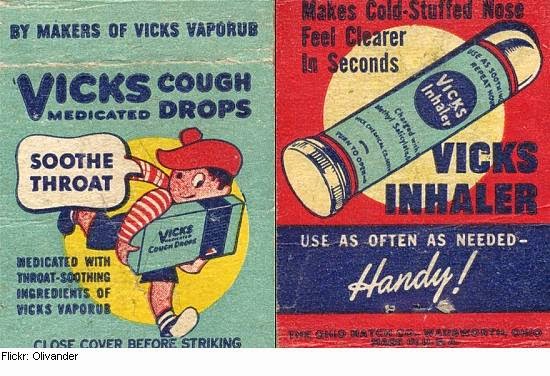 We see menthol for vaporizer dispensers, in cough drops, and the good ole jar of rub that mom used on our chests when we were sick.

But should we use it?


Menthol is a mild anesthetic that provides a cooling sensation when used as a cough drop. The menthol is basically a local anesthetic which can temporarily numbs the nerves in the throat that are irritated by the cold symptoms and provide some relief. (Interestingly, menthol is added to cigarettes in part to numb the throat so new smokers can tolerate the smoke irritation better. Hmmm...)


Menthol cough drops must be used as a lozenge and not chewed or swallowed because the menthol must slowly be exposed to the throat for the numbing effect. They are not recommended for young children due to risk of choking. Since science lacks strong evidence, but the risk to most school aged children is low and it is safer than most other cough medicines, I use the "if it seems to help, use it" rule for children not at risk of choking. Do not let any child go to sleep with one in his mouth. First, he might choke if he falls asleep with it in his mouth. Second, we all need to brush teeth before sleeping to avoid cavities!

Vaporized into the air

When it is put into a vaporized solution, menthol can decrease the feeling of need to cough. It should never be used for children under 2 years of age. They have smaller airways, and the menthol can cause increased mucus production, which plugs their narrow airways and may lead to respiratory distress. Infants can safely use vaporizers (and humidifiers) that put water into the air without any added medications.

The rubs for the skin

We've all seen the social media posts supporting putting the menthol rubs on the feet during sleep to help prevent cough. That has never made sense to me, and the link provided discusses that it is not a proven way to use the rubs.

Menthol studies show variable effectiveness. It has been shown to decrease cough from baseline (but the placebo worked just as well) and did not show improved lung function with spirometry tests (but people stated they could breathe better) in this interesting study. (So people felt better, but there really was no objective improvement.) Putting menthol rubs directly under the nose, as opposed to rubbing it on the chest, may actually increase mucus production according to a study published in Chest. In children under age 2, this could result in an increase in more plugging of their more narrow airways. There is a more recent study that does show children ages 2-11 years with cough sleep better with a menthol rub on the chest.

Menthol products should never be used in children under 2 years of age. It can actually cause more inflammation in their airways and lead to respiratory distress.

If a child ingests camphor (another ingredient along with menthol in the rubs) it can be deadly. It has been known to cause seizures in children under 36 months when absorbed or ingested in high concentrations. Menthol rubs sold in the US contain camphor in a concentration that is felt to be safe if applied to intact skin in those over 2 years of age. Mucus membranes absorb medicines more readily than intact skin, so do not apply to nostrils, lips, or broken skin. Do not allow children to handle these rubs. Apply only below their necks to intact skin.

Many people using the menthol rubs experience skin irritation. Discontinue use if this happens.