This is the 4th article in a series of learning and behavioral problems. It will focus on non-prescription medicine treatments, natural treatments, psychological and occupational therapies, and complementary alternative therapy for the treatment of ADHD. This is a bigger topic than I initially thought, so there are many links that go more in depth with each subtopic. 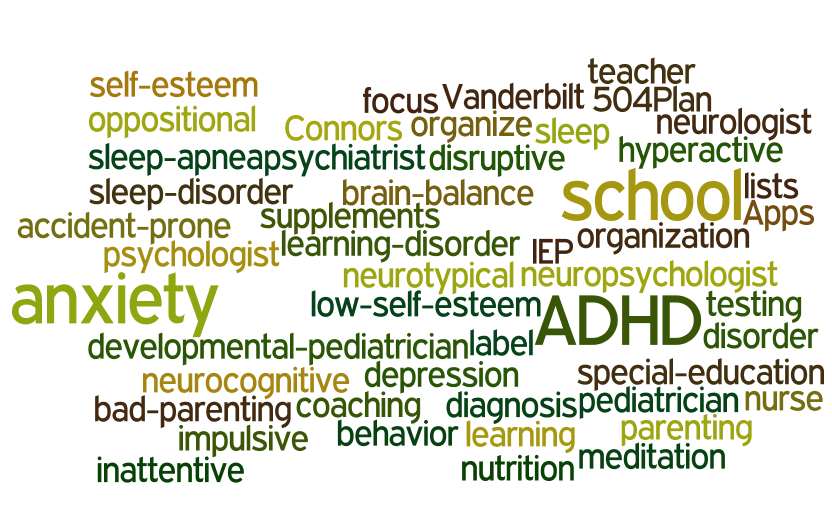 The first treatment for ADHD in children under 5 years should be cognitive behavioral therapy (CBT) with a licensed therapist. It also helps those of all ages learn techniques to control behaviors, screen thoughts before speaking, organize things, and more. Studies show that the best benefits for ADHD are a combination of medication and CBT for those over 5 years of age. CBT for younger kids involves a parenting style that is clear, consistent and has rewards and consequences. Working with a therapist involves parents more than the children. As kids get older, the therapist works with them to work on their own behavior.

Getting kids outside has many benefits for kids with ADHD. First, they are off all screens - which increase aggressiveness and impulsivity. Second, they are getting exercise. Studies show that when kids play outside their focus, attention, and behavior improve.

Exercise is beneficial to everyone on many levels, and in those with ADHD it is essential to help with overall focus and attention. Exercise helps to elevate the same neurotransmitters that are increased with stimulant medications, which helps with focus and attention and executive functioning skills (sequencing, working memory, prioritizing, inhibiting, and sustaining attention). Any exercise helps, but studies show the best are martial arts, ballet, ice skating, gymnastics, yoga, rock climbing, mountain biking, skateboarding, and whitewater paddling (I know not all of these are practical on a regular basis, but most are). These activities require sustaining attention, balance, timing, fine motor adjustments, sequencing, evaluating consequences, error correction, and inhibition.

Sleep problems are common in many children, especially those with ADHD. Fixing the sleep cycle can have extreme benefits in learning and behavior. Sometimes it is as easy as getting a routine for sleep to ensure the proper number of hours for a child, but often they suffer from insomnia, nightmares, sleep apnea, restless leg, or other medical conditions that impair sleep time and/or quality. Symptoms of chronic sleep deprivation in kids are hyperactivity, poor focus, and irritability. There are many kids who can have all of their ADHD symptoms relieved when they simply get better sleep. I see this in many teens who suddenly "develop ADHD"- only it's really not ADHD at all. They are running on 4-5 hours of sleep a night. If your child has sleep troubles not improved with these Sleep Tips, talk to your child's doctor.

There are many kids with ADHD who benefit from using techniques that occupational therapists use with sensory processing disorder (SPD). In some kids, SPD might be the real diagnosis causing symptoms of ADHD, but in others they may co-exist. Treating SPD is usually fun for the kids, and there is no harm in doing their techniques even if a child doesn't have the disorder. Schools have started integrating these ideas into their classrooms as needed, such as having kids sit on stability balls or using tactile objects at their desks. Therapy for SPD involves playing in ways that use sensory input (such as with sand or play doh, rolling down a hill, manipulating tactile objects, and more). For a great list of ideas visit Sensory Integration Activities, but working with an occupational therapist is recommended.

Biofeedback and neurofeedback are both approved therapies for ADHD. Children and adults with ADHD often have abnormal patterns of brain electrical activity on electroencephalographic (EEG) testing. EEG biofeedback is aimed at normalizing EEG activity by correcting the brain’s state of relative under-arousal and optimizing cognitive and behavioral functioning.

Neurofeedback trains kids to become more aware of their physiological responses and improve their executive functioning. Each neurofeedback session lasts 30-60 min and children usually need 10-20 sessions. Patients wear a cap that measures their brain activities, and it helps them train their brain to maintain focus during video games specific to this purpose.

The significance of most findings on neurofeedback and EEG biofeedback is limited by study design flaws that include small study sizes, heterogeneous populations, absence of a control group, inconsistent outcome measures, self-selection bias, and limited or no long-term follow-up. While this doesn't mean they don't work, I would like to see more studies showing their benefit.

Working memory training has been shown in studies to help with symptoms of ADHD, though there are some conflicting studies out there. Cogmed is the company that has studies showing benefit. It is a computer program that kids play like a video game, but it reportedly trains their brain to remember things. It is intensive: 1 hour a day, 5 days a week for 5 weeks, but can be done at home. It is expensive and not covered by insurance. About 70-80% of children show improvement immediately after the training, and of those who improved, 80% maintained the benefit over a 6 - 12 month window. Cogmed is designed to be used with medication, such as stimulants.

Herbs and other supplements

There are some studies (only 16 as of June 2011 -- 11 for nutritional supplements and 5 for herbal supplements, which in the research world is pretty small) supporting nutritional supplements or herbal medicines for ADHD, but many reported treatments have not been found effective. Pinus marinus (French maritime pine bark), and a Chinese herbal formula (Ningdong) showed some support. Zinc and iron both show benefit, but as discussed in Part 3 of this series, both can be dangerous at high doses. There was only mixed (mainly inconclusive) evidence for omega-3 and l-acetyl carnitine. Current data suggest that Ginkgo biloba (ginkgo) and Hypercium perforatum (St. John's wort) are ineffective in treating ADHD.


Just like anyone who needs help improving a skill, such as a pitcher or golfer, working with a coach with experience helping others in that area, working with an ADHD coach can help many with certain aspects of their life. ADHD coaches can help with organization, motivate a person with ADHD to finish tasks, or help them learn techniques that makes them more effective at life skills. Coaches do not do psychotherapy or counseling, which is beneficial for people who are against therapy, but agree that coaches can help people improve skills. It does not work if the parent makes the child go. The child must be motivated to make changes in his or her life and be willing to work on things, then coaching can be great. Tips on finding an ADHD coach can be found on PsychCentral.

Nutrition is very important for learning and behavior in all kids. For more on components of nutrition, elimination diets, and supplements, see Part 3 of this series.

No strong evidence exists for the following:

There are many alternative treatments out there that do not have scientific proof that they help. Many parents try these treatment programs in hope that their child's symptoms will go away. In general, if it sounds too good to be true, it probably is. Don't be fooled into thinking "alternative" or "natural" treatments are without risk. There are always risks, including the lost time not being on a proven therapy, leading to a child falling further behind academically and suffering emotionally from symptoms related to ADHD.

Brain Balance has a center in our city, and I've seen more than a few parents who waste time and money on their program. I don't know of any that noted significant and continued benefit. Although their website might look like there's impressive evidence to use it, there really isn't. Please see Science Based Medicine: Brain Balance for more information.

Caffeine is a stimulant but since it is available from grocery stores instead of pharmacies some parents feel more comfortable using it instead of a medication. If you're using it as a drug, it is a drug. Whether it comes in a beverage or a pill, it is a chemical with properties that act like other drugs in our bodies. Unfortunately studies don't really support its use. It is difficult to dose since it comes in so many forms, and most people develop a tolerance for it, requiring more and more, which can increase side effects. For details, see Science Based Medicine: Caffeine for ADHD.

I have not been able to find any valid scientific studies for chiropractic medicine for the treatment of ADHD.

Other complementary and alternative medicine (CAM) therapies that have been tried for ADHD but fail to show benefit include vision training and applied kinesiology. Insurance usually does not cover these and they can be quite expensive. I do not recommend them.

Psychiatric Times: Integrative Management of ADHD: What the Evidence Suggests