It happens all the time. Kids put things in their mouth that aren't supposed to be eaten. Parents often call about what to do when their toddlers or children swallow things. Most of the time things will just pass -- though I'm not a fan of watching the stools for the swallowed object because it just worries parents if they miss it. 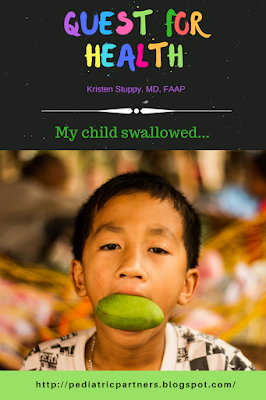 The biggest risk group is children between the ages of 6 months and 6 years, but anyone can be at risk. I have seen an older school aged child swallow a magnet after putting 2 small strong magnets on either side of their tongue to look like a tongue piercing. Adults have been known to swallow things such as needles (many sewers put the needle in their mouth if you think about it).

If you are around kids it is a good idea to know child CPR and refresh your skills every couple years. Classes are often held at local Red Cross stations, hospitals, or fire departments. You can also find classes by searching "CPR" and your zip code. For great information on signs and symptoms of choking and general treatment of choking, visit this KidsHealth Choking link.

If your child seems to put more non-food items in his mouth than other kids, he is at risk of pica. Pica is when a person compulsively puts non-foods in his mouth. For more see the KidsHealth Pica link.

Always keep the poison control number (1-800-222-1222) stored in all your phones! You will see below that I refer to them often. If you call your doctor about a potentially toxic substance, chances are we will refer to poison control. They have the best database of substance risks and their treatments. Don't delay treatment by calling the doctor!
Here's a list of common things and what to do.